The contest I announced for Friendly-traceback has resulted in a total of  nine entries so far from three different programmers.  Two of the cases submitted have already been fixed in the development version. They also gave me some ideas to explore other possible cases and I found a few additional ones that need to be fixed.

Meanwhile, on Twitter, I saw a few discussions (for example, here and here) about improvements to messages given by the Python parser for SyntaxError cases, and comparisons with Pypy which currently does a better job in some cases in providing more useful error messages. However, as recorded in this issue on the Python tracker, doing this in a useful way can be quite challenging: 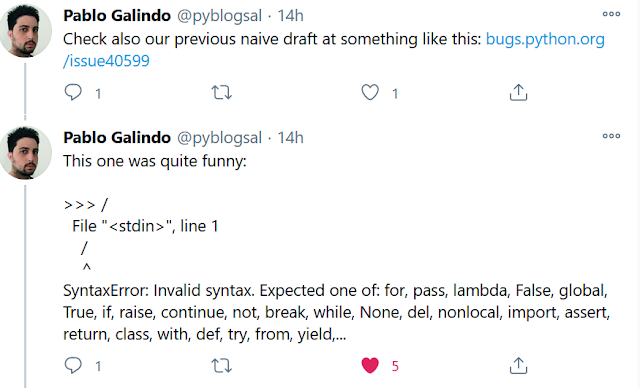 Strangely enough, the apparent impossibility of giving useful error messages in some cases reassures me since I couldn't figure out an approach that would always give the right clues. Perhaps I need to worry less and keep at it with my ad-hoc approach, looking for small improvements. Like Voltaire wrote: Le mieux est l'ennemi du bien  (Perfect is the enemy of good).

Posted by André Roberge at 7:19 AM