If you are not familiar with Reeborg's World, then this post is likely not of interest to you and I apologize for the title.

As Python programmers know, pip is extremely convenient to install Python modules.  However, when creating a website like Reeborg's World which does not store any user code on the server and run everything in the client (browser), the idea of installing a Python module may seem to be totally nonsensical: how can one install a Python module in a web browser?

Yet, since Reeborg's World aims to teach not only basic Python programming but also Python's concepts like creating and using a library and third-party modules, it only made to me that I should attempt to reproduce the basic idea of installing third-party modules.  After all, it already allow users to write their own functions in a library and import them; so why not finding a way to "install" third party modules from the web.

Before I explain how to do so, let me recap what can be done with Reeborg's World (just in case you are not familiar with it and did not get put off by the opening sentence of this blog post).

The student can also enter functions in the library and import them as usual. Reeborg's World uses Brython as its Python interpreter.

World creators (educators) can create their own worlds, making use potentially of six different editors:

In theory, an educator could design worlds that would include either in the "post-" editor or in the library some code to be used by the students.  However, this would have to be done every time a world is created, which can be quite tedious.  With the new functionality, one can load a script from anywhere on the web and have it made available as the content of a module named "extra".

Instead of calling the new function "install_extra()", I was toying with the idea of calling it "pip_install()" ... but I thought this might be 1) too cheeky and 2) potentially confusing for beginners when they moved to a "real" Python environment and had to use pip from the command line, and not from within an editor.  However, I am  not totally convinced that "extra" is the best name for this library nor that "install_extra()" is the best name for the new function.  If you have any suggestion or comments, feel free to do so.

For those that are curious and would like to try it, click on this link http://reeborg.ca/reeborg2.html?lang=en&mode=python&url=http://pastebin.com/raw/t9Vvj7nG&name=Install%20extra and then make sure to click on the button to have the content of the editor replace by that included with this sample world.
Note that this link is for a development version and may not work in the future.

This feature has just been implemented and may very well be buggy. To load modules, I make use of cross-domain http requests and a third-party server (http://cors-anywhere.herokuapp.com). When I first attempted to write code on pastebin, and then edit it, I found that the original version was cached ... which was not very helpful as I did not realize it at first and was wondering how come the changes I made to the code were not reflected in what I saw.  Coders beware...

Suggestions and comments, as usual, are most welcome.

[1] In addition to Python, Javascript is also supported. Instead of a traditional editor, one can also use Blockly or a Python REPL to program the robot.


Posted by André Roberge at 11:50 PM No comments: Links to this post

About two years ago, I implemented a permalink scheme which was intended to facilitate sharing various programming tasks in Reeborg's World. As I added new capabilities, the number of possible items to include grew tremendously. In fact, for rich enough worlds, the permalink can be too long for the browser to handle. To deal with such situations, I had to implement a clumsy way to import and interpret those permalinks after the page had been loaded. To give an idea of the potential complexity, here is a permalink (used by a teacher in Lithuania) that is still short enough to be handled by most browsers:

The above permalink appears to work ... but, due to a small addition to the old version of the site that handles these permalinks, the result is not quite what is desired: one must change "by hand" the programming mode (at the top) from Blockly to Editor.

The new permalinks will be much shorter and should be future proof; they can include, in any order:


The key here is the 3rd item. Instead of having to potentially deal with changing world format (to add new capabilities) AND permalinks to encode the new items, I only have to ensure that the world format remains backward compatible. Normal URL where a world can be found are usually quite short, and there is no need to worry about hitting some browser limit in terms of the number of characters.

For example, here is a URL that works on a temporary testing site, which loads a world definition I put on Pastebin (which anyone can do):

If you use Reeborg's World to teach and wish to be kept abreast of any major changes, please email me and I will add you to a mailing list that I just set up for this purpose.

Posted by André Roberge at 2:17 PM No comments: Links to this post

tl;dr: After two books published in Korean about Reeborg, a book on robotics written in French has a significant part of its content inspired by Reeborg's World. 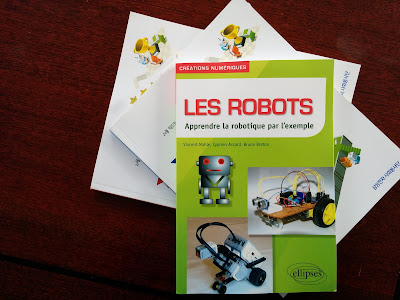 Instead of separate versions for different languages, (English, French and Korean so far), Reeborg's World is now available in all languages at a single location.  Mixed language modes are supported (e.g. UI in Korean with Python programs using English commands like move() ).  This previous single-language versions are still available (English, French, Korean) and will remain so until the new version has been fully tested and the documentation updated to refer to the new version.

Testing of the new version is encouraged, and new language adaptations are most definitely welcome.
Posted by André Roberge at 9:46 AM No comments: Links to this post

Scratching an itch with a Chrome extension

Over the years, I have tried various "tasks organizers" and always come back eventually to using a simple text file (lately, using markdown instead of plain text).  When writing markdown documents within Atom, my new editor of choice, I can easily preview them as processed documents, which makes it for a more pleasant reading experience.  When editing a markdown document with Atom, one can use packages like markdown-folder, to hide various sections; however this does not work in the preview panel, nor does it allow to hide "sub lists".

Since I can easily export markdown documents as html, I decided to write my first Chrome extension to view such documents in a "nice" format, while allowing to hide/show various parts of the document based on the html headings (h1 to h6) or as list items containing other lists, ordered or unordered.

This extension is still very rough around the edges and could definitely be greatly improved upon.  It is definitely not in an acceptable state to be uploaded to the Chrome Web Store. For now however, it does the basics of what I wanted it to do and works on any tab for which it has been activated.
Posted by André Roberge at 3:40 PM 4 comments: Links to this post