A short while ago I discovered HackInScience, a fantastic site for learning Python by doing exercises. It currently includes 68 programming exercises, with increasing level of difficulty.
I learned about it via an issue filed for Friendly-traceback: yes, HackInScience does use Friendly-traceback to provide feedback to users when their code raises Python exceptions.  These real-life experiences have resulted in additional cases being covered by Friendly-traceback: there are now 128 different test cases, each providing more helpful explanation as to what went wrong than that offered by Python. Python versions 3.6 to 3.9 inclusively are supported.

Previously, I thought I would get feedback about missing cases from teachers or beginners using either Mu or Thonny - both of which can make use of Friendly-traceback. However, this has not been the case yet, and this makes me extremely grateful for the feedback received from HackInScience.

While Friendly-traceback can provide feedback in either English or French [1], HackInScience only uses the English version - this, in spite of the fact that it was created by four French programmers.  I suspect that it is only a matter of time until they make a French version of their site.

One excellent additional feature provided by HackInScience is the addition of formatting (including some colour) in the output provided by Friendly-traceback. 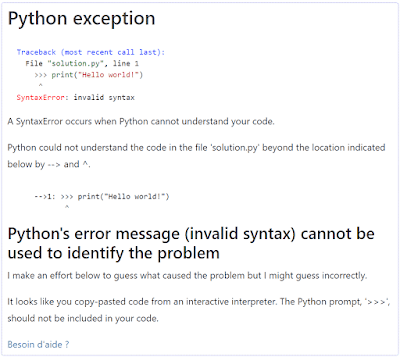 The additional cases provided by Julien Palard from HackInScience have motivated me to clear out the accumulated backlog of test cases I had identified on my own. Now, there is only one (new) issue: enabling coloured output from Friendly-traceback's console.

Please, feel free to interrupt my work on this new issue by submitting new cases that are not covered by Friendly-traceback! ;-)

[1] Anyone interested in providing translations in other languages is definitely welcome!
Posted by André Roberge at 8:46 AM No comments: