Live preview of reStructuredText to HTML conversion in your browser

I've implemented a new plugin for Crunchy which may be of interest to some: a reStructuredText editor with live preview inside the browser window.  Each time a key is pressed in the editor (html textarea), an ajax request is sent to the Python backend with the entire content of the editor.  This is processed by docutils with the result sent back to the browser as a full html page displayed inside the browser as illustrated below.

I expected this to be slow (make that very slow) and for the first prototype I wrote, I only sent the ajax request when "enter" was pressed.  After playing with it for a while, I realized that there was no need for this.

If you type fast enough, the previewer does not keep up for each key press, but this does not hinder in any way the speed at which you can enter text in the editor.  By the way, the editor (html textarea) can be converted into a true embedded editor which can save and load files, etc. - otherwise, it would not be a very useful tool for working with reStructuredText documents.  When doing so, the live preview is turned off.  I've also included the possibility to save the html file produced so that one does not have to invoke docutils separately.  And this also incorporates the two custom directives (crunchy and getpythonsource) used by Crunchy and crst2s5.

This is included in the newest release (1.1.2) of Crunchy.
Posted by André Roberge at 5:21 PM 3 comments: Links to this post

Something I am working on... 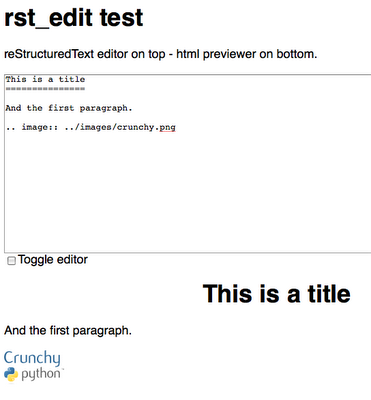 Posted by André Roberge at 2:08 PM 3 comments: Links to this post

In a few months, many pythonistas will be converging to Atlanta to take part in the next Pycon.  I'm hoping to be able to attend it as I have been really inspired by the many people I met in two previous conferences.  While I most likely won't be presenting anything this time, I thought I would try to contribute to some presentations in an indirect way.

A while ago, Ned Batchelder wrote about presentation tools - more specifically about how he found all of them lacking.  In the comments section, many people made various suggestions - including one suggestion by Steve Holden which read as follows:

HTML plus live Python - what could be better?

While I, of course, approve of any positive support of Crunchy, I had to admit to myself (and mention in a subsequent comment) that Crunchy was really not up to the task - at least not yet.

In his post, Ned addresses some of the weaknesses of the tools he looked at.  In particular, he mentioned S5 about which he wrote:

S5 (A Simple Standards-Based Slide Show System) is all HTML, CSS, and Javascript, runs in the browser, and was created by Eric Meyer, a very nice pedigree. Remarkably, the thing I like least about it is that when I display the slides in a full-screen Firefox, they look horrible. The text is either too small or too large, and the line-spacing too tight, while the slide title overlaps the text in the wrong way, exposing some of the structure of the divs.
I would have hoped that a CSS-based slideshow by the king of CSS would be a shining example of how information could be cleanly authored and then sparklingly displayed. S5 seems to miss this mark, especially since there don't seem to be many themes available for it, another surprise given how CSS should have made it accessible to lots of designers. Also, although (or perhaps because) the format is native to the web, it's not possible to get the slides as illustrations.

Still, S5 is used for quite a few presentations by pythonistas thank to rst2s5, the docutils script that transform reStructuredText files into S5 presentations.  If I can summarize, rst2s5 strengths are as follow:

Some of the weaknesses are the following:
- speaker's notes on the laptop screen
- slides on the projector
- two views stay in sync
- presentation controlled from either display

rst2s5 is based on S5 version 1.1.  A new version (1.2 alpha) is available which addresses some of the shortcomings of version 1.1 with the addition of speaker's notes which are in a separate window (e.g. on the laptop screen) while the slides themselves are in a different window (which can be on the projector) with the two synchronized.

I have decided to hack at the source (I don't like javascript...) and adapt S5 1.2 in ways which address some of Ned Batchelder's criticisms about the line spacing, etc, by disabling the automatic font scaling.  I incorporated it in a new program called crst2s5 which can be thought of as a Crunchy-extension to rst2s5.  crst2s5 on its own can produce standalone presentations (like rst2s5).  I consider it to be an improvement to rst2s5 ... time will tell if others share my opinion.

However, where crst2s5 can yield really interesting results is when you view the html output with Crunchy.  For now (version 1.1), when you do so, the automatic synchronization of speaker notes and slides is disabled - this will be addressed hopefully in the near future.   You can either try it by downloading the code or have a look at this sneak preview which I put together in one quick take as an experiment:


Get the Flash Player to see this movie.

Original location: 'Crunchy'
at ShowMeDo from the Python category.

Now, if only I had better graphical skills to design good looking slides...
Posted by André Roberge at 8:15 PM No comments: Links to this post