Summary This post is the first in a series dedicated to
examining the use of profiling and, eventually, using cython, as a
means to improve greatly the speed of an application. The intended
audience is for programmers who have never done any profiling and/or
never used cython before. Note that we will not make use of cython
until the third post in this series. 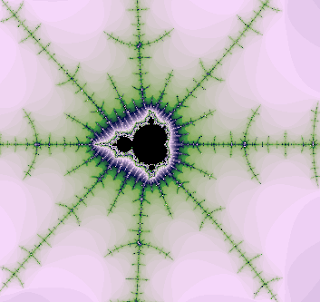 
Python is a great multi-purpose language which is really fun to use. However, it is sometimes too slow for some applications. Since I only program for fun, I had never really faced a situation where I found Python's speed to be truly a limiting factor - at least, not until a few weeks ago when I did some exploration of a  four-colouring grid problem I talked about. I started exploring ways to speed things up using only Python and trying to come up with different algorithms, but every one I tried was just too slow. So, I decided it was time to take the plunge and do something different. After considering various alternatives, like using shedskin or
attempting to write a C extension (which I found too daunting since I don't know C), I decided to try to use  cython.

cython, for those that don't know it, is a Python look-alike language that claims


to make writing C extensions for the Python language
as easy as Python itself.


After looking at a few examples on the web, I concluded that such a rather bold statement might very well be true and that it was worthwhile trying it out on a more complex example. Furthermore, I thought it might be of interest to record what I've done in a series of blog posts, as a more detailed example than what I had found so far on the web. As I was wondering if an esoteric problem like the four-colouring grid challenge mentioned previously was a good candidate to use as an example, by sheer serendipity, I came accross a link on reddit by a new programmer about his simple Mandelbrot viewer.

Who does not like fractals? ... Furthermore, I have never written a fractal viewer. This seemed like a good time to write one. So, my goal at the end of this series of posts, is to have a "nice" (for some definition of "nice") fractal viewer that is fast enough for explorations of the Mandelbrot set.  In addition, in order to make it easy for anyone having Python on their system to follow along and try their own variation, I decided to stick by the following constraints:

So, without further ado, and based on the example found on the reddit link I mentioned, here's a very basic fractal viewer that can be used as a starting point.

At this point, perhaps a few comments about the program might be useful
This basic application is not really useful as a tool for exploring the Mandelbrot set, as the region of the complex plane it displays is fixed. However, it is useful to start with something simple like this as a first prototype. Once we know it is working we can move on to a better second version. So, let's write a fancier fractal viewer following the outline below:

Here is a second prototype for my fractal viewer, having the features described above.


I move the Mandelbrot set calculation in a separate file.


And, finally, I implement the missing functions for the viewer in a new main application.

Let me conclude with few black and white pictures obtained using this program, which, if you look at the time, highlight the need for something faster. First for 20 iterations, drawn in 4 seconds. 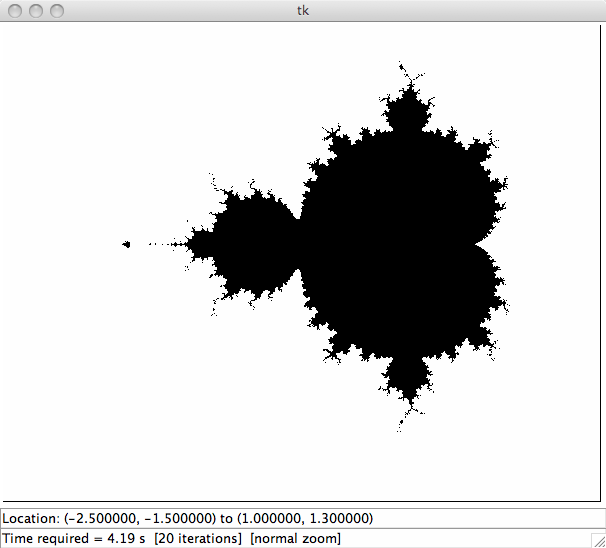 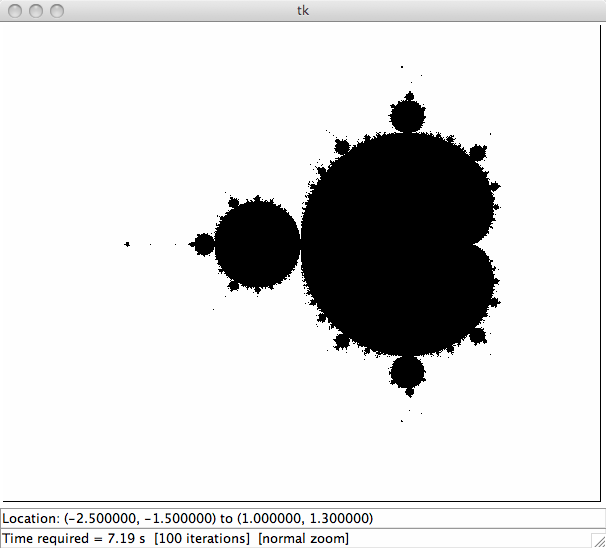 Next post, I'll start profiling the application and make it faster.
Posted by André Roberge at 10:17 PM

Viewer did not function as the event types were wrong. Finally I could get it kind of working with changing the events to

didn't work for me either but based on http://www.pythonware.com/library/tkinter/introduction/events-and-bindings.htm i was able to get it to work with

didn't work as above; on my setup the buttons are CaseSensitive, so you may try this:

PS. here on comments to display e.g. > or < characters you need to encode them...

Please note that this blog post is 10 years old ... so it should not be surprising that the code would not work exactly as written anymore.