A short while ago, I started working on an adaptation of EasyGUI for PyQt.  This new project is called EasyGUI_Qt.  For those that are not familiar with EasyGUI, the idea is to provide a series of graphical "widgets" that can be used in procedural programs.  For example, suppose you have a program where you query a user with Python's input:

Normally, you'd see a copy of the prompt appear, waiting for the user's response.  Using EasyGUI_Qt's  analogue of input(), this is what would show instead of a prompt:

There is also a demo launcher which can be used to see all of the available widgets: 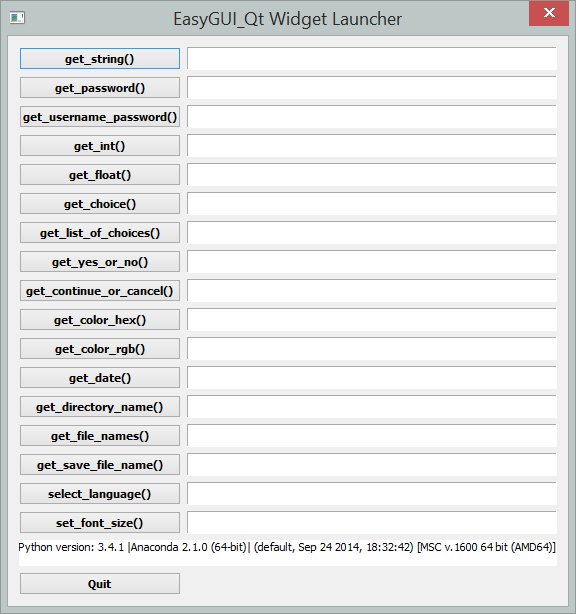 A complete description of the existing widgets is available.  EasyGUI_Qt will not have all the same widgets available as the original EasyGUI.  While the current version number is 0.4, it is, in fact, nearly complete.  I have written a roadmap indicating what's left to be done until the 1.0 release. Anyone should feel free to make comments about the proposed roadmap including making suggestions for additional widgets (with justification provided).

EasyGUI_Qt targets Python 3.3 (and PyQt4) but should support (except for some pesky unicode issues) Python 2.7 - following some requests by users.