About a month ago, my second computer (actually, my main computer as the kids had taken over the better one) died. I had saved the hard-drive and managed tonight to recover the data on it. I found the beginning of a "standard" tutorial (in French) that I had started to write so that my kids could learn Python. That was in August 2004. Shortly afterwards, I discovered Guido van Robot and got inspired to create RUR-PLE. I worked fairly steady on it for a year and then, somehow, haven't been able to find the time to work on it for the past few months.

While I have been quite please with RUR-PLE in general, I have found one thing less than satisfactory: RUR-PLE uses wxPython and wxHtmlWindow to display its tutorial. 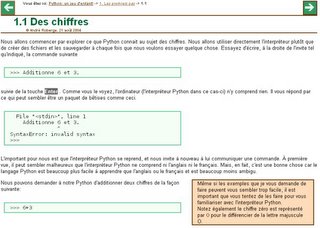 Unfortunately, wxHtmlWindow does not support style sheets, but only simple html tags. My French tutorial made use of all kinds of css tricks in an attempt to have a pleasant look. I had to gave that up and hard-code font information in the tutorial that has been included with RUR-PLE.

I have found the result with wxHtmlWindow and hard-coded fonts to be somewhat disappointing. So, today I decided that I had to try and implement some work-around so that at least I could use style-sheets to colorize the source code and headings. I have made some limited progress and I hope to have something working soon, so that I can 1. change the existing lessons so that they use some (limited) styles instead of hard-coded font information, and 2. go back to writing some more lessons and get to version 1.0!

Note: I know of the existence of wxMozilla, but haven't been able to get it to work last time I tried. RUR-PLE, which is geared towards beginners (or teachers!) already require three separate installs (Python, wxPython, and itself!). I find this is already a bit much. Besides, if I haven't been able to get wxMozilla to work on my computer, how could I expect a complete beginner to do it?...
Posted by André Roberge at 10:15 PM

Is there a simple way of installing wxMozilla now _ I have googled myself crazy but to no avail so far,

I don't know, I never tried since I posted this message. I pretty much gave up on the idea especially since I started working on an app (crunchy) that bypasses wxPython altogether and uses Firefox as the GUI.